Nice weekend, went very fast though. I had my lie in Saturday, though got up at nine to watch the rugby. Outrageous that France have made it all the way to the final they have not deserved it at any stage (except maybe when they beat England), Wales were robbed. Went out to Dobbies garden centre, was very nice.

Sunday morning went to the beach with the boy as it was so nice. Somehow I lost his coat on the way back which is a damn shame. I retraced my steps but no sign of it at all, bah. Worth it for this lovely picture though: 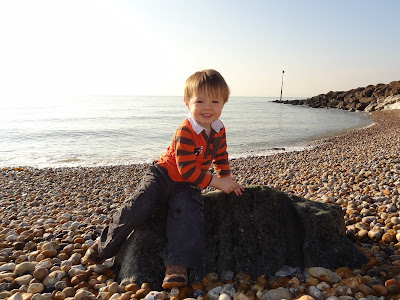 In the afternoon we went for a walk in the woods near Lyminge. This was the first day since I got a free pedometer from work (as part of wellbeing week) that I have actually taken more than a few steps, so I was looking forward to getting my average up. I've been doing about 4000 steps a day, Clare tells me that anything less than 10000 is basically standing still. So of course I lost the pedometer.

Doing some work now with all sorts of modern things like nodejs, express, jade, and stylus. I feel futuristic.

nodejs: Javascript (programming language of the internets) on the server side.

⬅️ Now I want another new telly :: This sounds like the start of a great film ➡️

Paul Clarke's weblog - I live in Hythe. Wed to Clare and dad to two, I am a full-stack web developr, + I do mostly javascript / nodejs, some ruby, python, php ect ect. I like pubs, parkrun, eating, home-automation + other diy stuff, history, genealogy, Television, squirrels, pirates, lego, and time travel.