We went to the White Cliffs today, and most importantly Clare was seen there by the boss and other workmates, so everyone knows she joined in. Not everyone knows we only went about half a mile in to the walk and then started back again because The boy was NOT keen at all. Probably for the best as none of us are feeling 100% right now, damn colds... We came back by a different route and found some really interesting little caves lower down in the white cliffs: 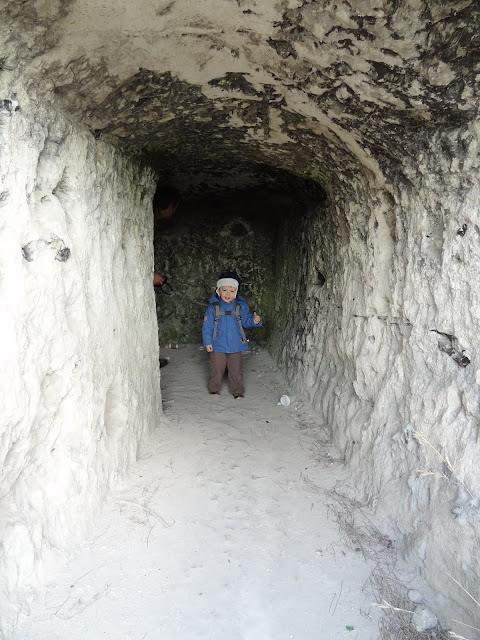 Today I also mounted the new TV to the wall, first time I have done this, a bit nervous about my DIY and the wall bracket I bought off the internets holding, so I have left it with a big cushion underneath for now. Still got to run some cables so as to get rid of the power lead that is trailing down the wall, and also get the HD feed (and another lead for the "magic eye") from the Sky box downstairs.

I already miss having this TV in the dining room, maybe before buying a big version of it for the lounge I should get another one of these (some tv that I seeminly forgot to link to) and mount in on the wall in the dining room...

I have thirty quid in my TV fund so far, after a twenty-five pound win on the premium bonds last week and a fiver on the euromillions. I have not even checked yesterday's lottery yet, I have probably won that too.

Paul Clarke's blog - I live in Hythe in Kent. Married to Clare + father to 2, I am a full-stack web engineer, and I do javascript / nodejs, some ruby, python, php ect ect. I like pubbing, running, eating, home automation and other diy jiggery-pokery, history, genealogy, Television, squirrels, pirates, lego, + TIME TRAVEL.