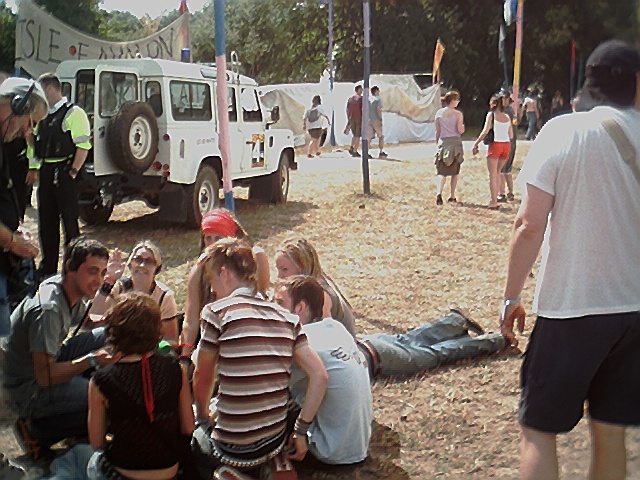 Back from Glastonbury, glad I didn't hang around for Moby and The Manics, tempting though it was, we were sat in front of the telly eating curry before they came on, ACE.

Saw REM twice this week, haven't eaten Snackajacks as they look like polystyrene and aren't actually that low in fat1. Man it was HOT at that festival, I am sun burned. Back in the office now and they've moved my desk.

Before we went away saw Kelly Osbourne and Har Mar Superstar and REM, NICE little warmup for Glastonbury, sort of makes up for the fact that we didn't see many bands while we were there... The Darkness were the best by far, they opened the whole shebang and did a full set, including some call and response with the audience and their Radiohead cover... saw Radiohead too, possibly their version of Street Spirit was seen by more people and got a better response, but it's a close call.

Missed John Otway this year, but did see Stewart Lee again, he might have had some new material this year, but we'll never know, he was completely thrown by a couple of hecklers - one with a car horn and one dressed as jesus complete with full sized cross... The Coral were one of the best bands for me, and Leningrad Cowboys were the worst of the dozen or so I saw. Jimmy Cliff, Polyphonic Spree, Suede, Jools Holland, the start of the Super Furry Animals, the end of Radiohead were somewhere in between.

Best food all weekend was from Yam The Casava, creole vegan stuff, a nice platter for five quid including a fritter of some kind, mushroom thing, rice thing, salad thing, chili thing and vegetable gumbo, ACES. Not sure what Yam The Casava is meant to mean, if it's a play on Rock The Casbah, it's not a very good one.

Everyone seems to have been asking if we were back stage or not, we've not done that at Glastonbury yet and not sure if we will. Not sure why it matters, I can go for three days without air kisses and bottled lager.

And that's the end of my review.

💬 And back to work